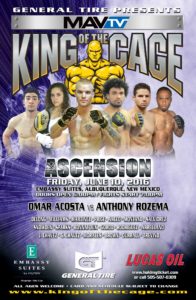 RANCHO CUCAMONGA, CA (May 26, 2016) – On Friday, June 10, 2016, King of the Cage returns to Embassy Suites Albuquerque Hotel & Spa in New Mexico for another spectacular evening of live MMA action, headlined by a Middleweight (185 pounds) showdown between Anthony Rozema and Omar Acosta and featuring some of the sport’s most ferocious competitors.

The Main Event, in the 185 lb. Middleweight Division, will feature undefeated Anthony Rozema (3-0) from Albuquerque, New Mexico (Judgement MMA) going up against Omar Acosta (3-1) from Clovis, New Mexico (Force of 1 MMA). Rozema is top ranked and is looking for his third consecutive TKO. Acosta has tremendous knockout power and will be making his U.S. debut after fighting in Mexico the last several years.

The Co-Main Event in the 145 lb. Bantamweight Division will feature Evan “The Matrix” DeLong from Albuquerque, New Mexico (FIT NHB’S NM Wildbunch).
DeLong will be looking for his second consecutive victory under the King of the Cage banner after making the long journey from Indiana and relocating to the Duke City. He is a well-rounded, exciting, and has quickly become a fan favorite.

The card features two Amateur fights with fighters looking to win their spot in the 2016 KOTC World Amateur Championships 3, which is scheduled for September 3rd in Las Vegas, Nevada for their shot at an exclusive KOTC Professional Contract. For the men, Albuquerque’s Sherwin Price (155 lbs.) will be looking to earn his spot in front of the home crowd and regional favorite Cynthia Arceo (115 lbs.) will headline the female bout.

Also, two KOTC Southwest Amateur Belts will be on the line in a tournament format. Some of the top fighters from the region will compete in four man brackets to see has what it takes to earn these belts. June 10th will be the first round of the tournament with the finals August 20, 2016 back at Embassy Suites Hotel & Spa in Albuquerque for the winners of each bracket. The tournament will feature the top amateur fighters in the 135 and 155 lb. weight classes.

Doors open at 6:00 p.m. and fights start at 7:00 p.m. Reserve seating and Ringside tickets are on sale now. For more information or to purchase tickets, please visit www.holdmyticket.com or call (505) 507-0309. Event card subject to change.