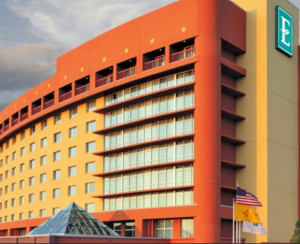 RANCHO CUCAMONGA, CA. (October 21, 2016) – King of the Cage, the leader in casino mixed martial arts entertainment, returns to Embassy Suites Albuquerque Hotel & Spa in New Mexico on Saturday, November 26, 2016 with another world-class mega-event headlined by a showdown between Tim Sosa and Johnny Guillen for the vacant Jr. Flyweight Title and featuring some of the sport’s most ferocious competitors.

Doors open at 6:00 pm. and fights start at 7:00 pm. Reserve seating and Ringside tickets are on sale now. For more information or to purchase tickets, please visit www.holdmyticket.com or call (505) 507-0309. Event card subject to change.