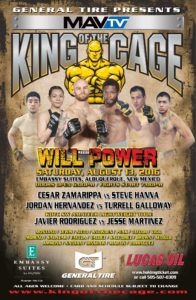 RANCHO CUCAMONGA, CA. (July 19, 2016) – On Saturday, August 13, 2016, King of the Cage returns to Embassy Suites Albuquerque Hotel & Spa in New Mexico for another spectacular evening of live MMA action, headlined by a Welterweight (170 pounds) showdown between Steve Hanna and Cesar Zamarripa and featuring some of the sport’s most ferocious competitors.

The Main Event, in the 170 lb. Welterweight Division, will feature Steve Hanna (7-2) from Albuquerque, New Mexico (FIT NHB’s NM Wildbunch) against Cesar Zamarippa (3-2) from Ciudad Juarez, Mexico (Ragnarok MMA). Hana is coming off of three consecutive impressive wins with two coming by way of TKO. After making a name for himself in the Mexico MMA circuit, Zamarripa made his US debut last year with King of the Cage winning by TKO.

One of the featured fights will be for the King of the Cage Southwest Amateur Lightweight Title and feature Jesse Martinez from Santa Fe, New Mexico (Santa Fe BJJ MMA) against Javier Rodriguez from El Paso, Texas (US AK Team Punishment).

Another featured fight in the 205 lb. Heavyweight Division will be Josh Moreno who from Albuquerque, New Mexico (Judgment MMA) doing battle with Mike Cook from Denver, Colorado (Child’s Play MMA). Moreno will be making his professional debut and was undefeated in his amateur career.

Doors open at 6:00 pm. and fights start at 7:00 pm. Reserve seating and Ringside tickets are on sale now. For more information or to purchase tickets, please visit www.holdmyticket.com or call (505) 507-0309. Event card subject to change.