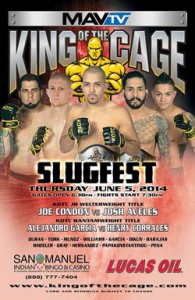 Rancho Cucamonga, CA (April 22, 2014) On Thursday, June 5, 2014, King of the Cage returns to the San Manuel Indian Bingo & Casino in Highland, California for another blockbuster evening of MMA action with two championship belts on the line. “Slugfest” will be broadcast live to all cable and satellite subscribers on MavTV (Channel 214 Direct TV, Channel 248 Dish Network). Check your provider for MavTV.

If your cable provider does not offer MavTV, be sure to check with your Pay Per View provider to view this event.

One of the featured bouts will be for the KOTC Junior Welterweight Championship. Joe Condon will face current champion Joshua Aveles, who is coming off his previous fight where he re-gained his Welterweight title from Kito Andrews.

The other championship fight for the KOTC Bantamweight Championship will feature Alejandro Garcia against Henry Corrales, who is defending his belt with an undefeated record.

Another exciting battle will showcase Seth Dikun against Trace Gray. Dikun is looking to work his way back up for another shot at the Bantamweight title. Gray, a KOTC newcomer is hungry for a future opportunity for the 145 lb. belt.

Doors open at 6:30 p.m. Reserve seating and Ringside tickets are on sale now. For more information on upcoming KOTC MMA fights or to purchase tickets, please visit http://www.sanmanuel.com or call (800) 359-2464. Guests must be 21 years old to attend. Event card and schedule are subject to change.