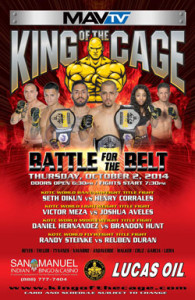 RANCHO CUCAMONGA, Calif. (September 3, 2014) On Thursday, October 2, 2014, King of the Cage returns to the San Manuel Indian Bingo & Casino in Highland, California for another blockbuster evening of MMA action with Four Title Belts on the line.

In the main event, undefeated Henry Corrales (10-0-0) will put his KOTC Bantamweight (145 lb.) title and perfect record on the line against the always dangerous, Seth Dikun (9-6-0). Dikun earned a rematch with Corrales, who stopped Dikun in their last bout with a cut.

In the co-main event, KOTC Junior Welterweight (160 lb.) Champion, Joshua “El Rey” Aveles, from Ontario, California, will defend his title against Sam Liera, from Fullerton, California. Aveles is coming off an impressive victory and successful defense of his belt against Aaron “Slam” Wetherspoon. Liera has dropped to the 160lb weight class to get a rematch against the man who took his 170lb title from him.

A battle for the vacant 185 lb. KOTC Middleweight title pits two KOTC veterans against each other. Daniel Hernandez, will finally get his shot at the belt. Hernandez, who was forced to pull out of his title fight last year due to an injury, must get by former KOTC Middleweight champion Brandon Hunt. Hunt is on a mission, looking to regain the title he held for over two years.

Another battle for the belt for the King of the Cage Flyweight (135lb) championship belt will feature current KOTC Flyweight champion, Randy Steinke taking on battle tested Reuben Duran.

Doors open at 6:30 p.m. Reserve seating and Ringside tickets are on sale now. For more information on upcoming KOTC MMA fights or to purchase tickets, please visit www.sanmanuel.com or call (800) 359-2464. Guests must be 21 years old to attend. Event card and schedule are subject to change.