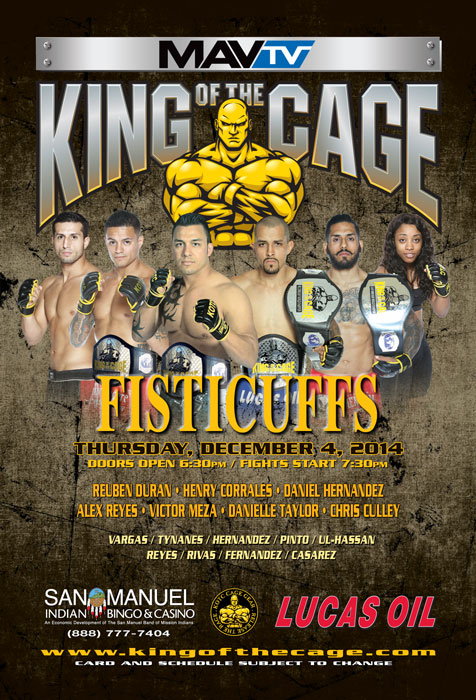 RANCHO CUCAMONGA, Calif. (November 10, 2014) On Thursday, December 4, 2014, King of the Cage, one of the world’s premier organizations for Mixed Martial Arts, returns to the San Manuel Indian Bingo & Casino in Highland, California for another action-packed evening of MMA action with eleven action packed fights on the card.

In the co-main event, undefeated Henry Corrales (11-0-0) will put his KOTC Bantamweight (145 lb) title and perfect record on the line against Chris Culley (12-6-0). Culley returns to King of the Cage for the first time in two and a half years and hopes to take the title from the champion.

Reuben Duran, who won a very close decision against Eduardo Torres, capturing the KOTC 135 lb. Flyweight Title, will give Torres another chance at San Manuel. Duran, now defending his newly won title, will be looking to prove he is the true champion, and that Torres, again, will have to try to take it from him. Torres believes that he went 5 rounds with Duran before and can do it again, and thinks he will overtake the new champion.

Victor Meza (10-3-0) returns to put his KOTC 155 lb. Lightweight Title on the line against Alex Reyes (5-1-0), who earned a title shot after his dominating performance and win over Quinton McCottrell in October. This fight is an early candidate for “fight of the night”, with both fighters being strong strikers. This looks to be a stand up war, where the winner will walk away with the ultimate prize….. The KOTC World Championship Title.

Other fights on the card include Lowen Tynanes vs. Ryan Healy; Chase Gibson vs. David Hernandez; Marlen Magee vs. Jay Pinto; Dominick Reyes vs. Jose Rivas; Izic Fernandez vs. Bronson Casarez and Steve Ramirez vs. Georgie Garcia, and Tommy Vargas.

Doors open at 6:30 p.m. Reserve seating and Ringside tickets are on sale now. For more information on upcoming KOTC MMA fights or to purchase tickets, please visit http://www.sanmanuel.com or call (800) 359-2464. Guests must be 21 years old to attend. Event card and schedule are subject to change.