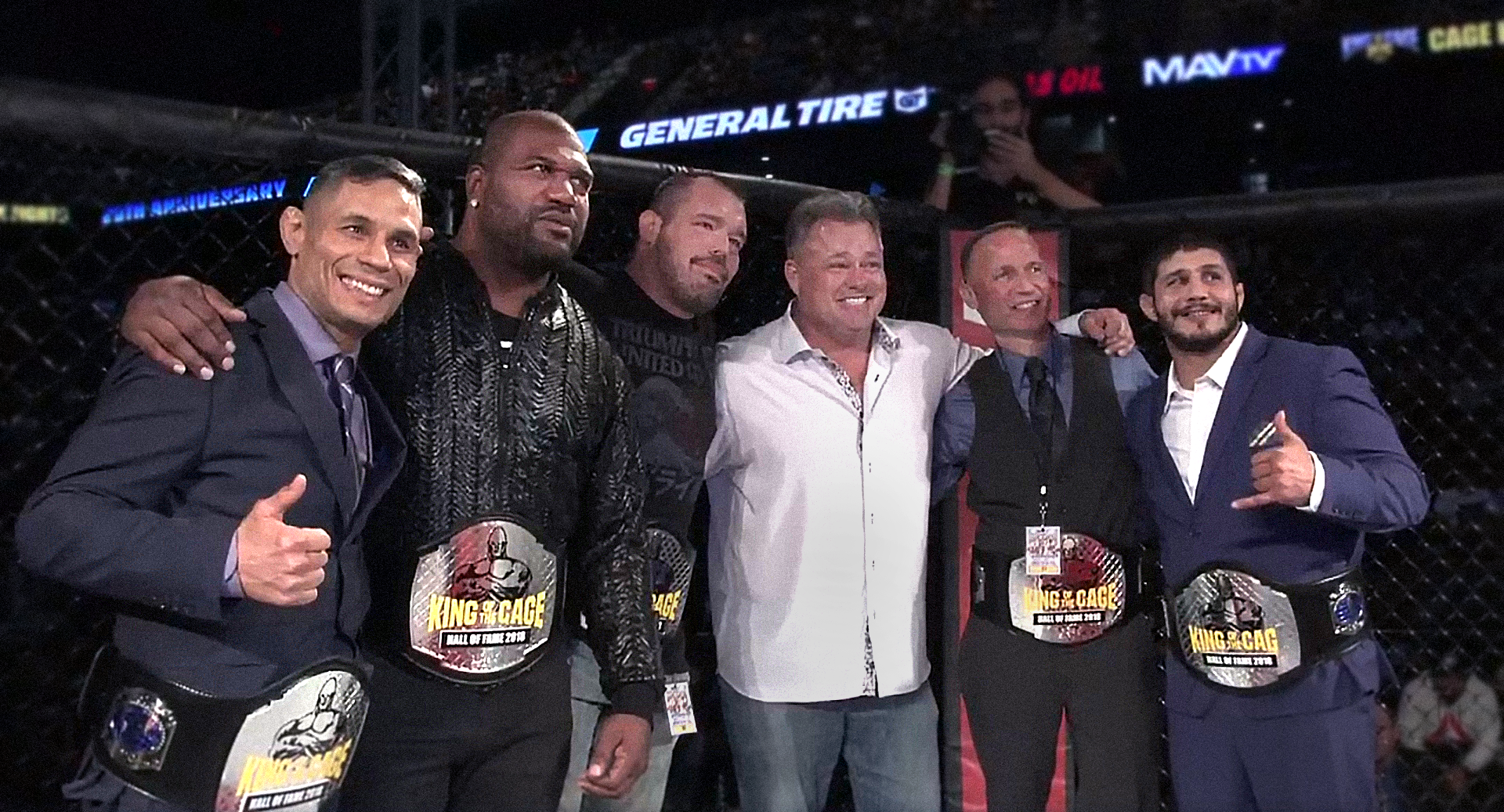 Some of the most well-known MMA athletes in the sport were honored in front of a sold-out crowd during the live fight event.

“It is an honor to welcome these elite athletes into the KOTC Hall of Fame, said Terry Trebilcock, Founder and CEO of King of the Cage. They have helped shaped the sport into what is has become today and were true pioneers in King of the Cage history.”

KING OF THE CAGE HALL OF FAME INDUCTEES

QUINTON “RAMPAGE” JACKSON
Quinton “Rampage” Jackson continues to have an illustrious MMA career and we’re proud to say it all started with King of the Cage.

Quinton’s most notable achievement to date is that he was the first ever to win a unified title in MMA and did so in 2007 when he defeated Dan Henderson to become the unified Light Heavyweight champion for both Pride and the UFC. It made perfect sense, that in Sherdog named him the 2007 Fighter of the Year.

He was also awarded Fight of the Night three times versus Forrest Griffin, Keith Jardine and Jon Jones.

Moreover, Rampage got KO of the night against Chuck Lidell and Vanderlei Silva, who he defeated for a second time just last month in September. That enhanced his overall record to 38 victories with 13 defeats in his 51 bouts.

Outside of the cage he’s appeared in various TV shows like “King of Queens” and starred in movies such as The A-Team. He also has a new movie coming out soon, called Boss Level.

After King of the Cage, Dean went on to fight in six matches for the UFC.

Dean also competed at the highest level of submission wrestling and was known worldwide for being the new age innovator of leglocks.

Being an outstanding grappler, Dean was invited and competed often in the prestigious Abu Dabi Combat Club… better known as the ADCC World Championships. There, he won the 2003 ADCC World championship, then in 2005 became the Superfight Champion, by defeating Jean Jacques Ma-CHA-doe. He claimed another gold medal in 2011 after submitting Joao Assis in the final by heel hook.

Dean had 13 victories in MMA, with hundreds of more in Grappling.

With King of the Cage, we are very proud that Javier represented us as our Lightweight Champion of the World.

His 16 -5 record is impressive, but it was his will to win and compete that garnered fans from all around the world.

In 2009, Javier’s fight against Alberto Crane was named Sports Illustrated’s “Most Inspirational Performance of the Decade” in which he fought 3 rounds with a torn ACL. You don’t get any tougher than that.

Also worth mentioning is Javier’s impressive 2010 WEC victory over Jens Pulver by Arm Bar as well as his defeat of decorated grappler Mackens Semerzier by submission, that same year.

In 2011, after the WEC and UFC merged, he defeated our very own Joe “Daddy” Stevenson by unanimous decision.

Javier’s toughest battle has been outside of the cage, as he is currently battling cancer but is thankfully winning the fight of his life and on his way to knocking it out.

ERNIE “THE PIRANHA” PEREA
Fontana, California native Ernie “The Piranha” Perea was an unstoppable MMA opponent who ended his short-lived but successful career with a perfect 7- 0 record.

One of his big victories was in October of 2006 at the Soboba Casino, where Ernie won the Superfight Championship against Albert Hill by Submission in Round One.

“The Piranha” is a two-time KOTC Superfight Champion and has also been a trainer, cornerman, matchmaker and promoter during King of the Cage’s 20-year run. The man simply does it all.

It is worth noting that Ernie got into MMA just as a hobby. As he put it, “I did it mainly to entertain my buddies, so they would come out, drink beer and watch me fight”. As they say, the rest is history.

Ernie is a 20-year veteran of law enforcement who just retired from the force, so we wish him well in his future endeavors.

JOE “DADDY” STEVENSON
Victorville, California’s Joe “Daddy” Stevenson is simply one of the greatest fighters to ever enter the cage.

Just last year, in February 2017, Joe “Daddy” returned to the cage to compete again in the 25th season of The Ultimate Fighter Tournament called Redemption.

In the UFC, Joe was awarded Fight of the Night four times and twice for Submission of the Night.
But, before accomplishing any of that, Joe “Daddy” was a force to be reckoned with in King of the Cage, becoming our World Champion in both the Lightweight AND Welterweight divisions.