King of the Cage Advances the Female Divisions of Both 105 and 115 lbs. 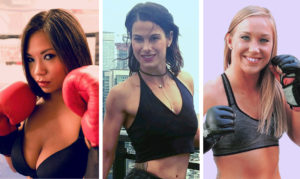 RANCHO CUCAMONGA, CA. (August 21, 2017) – Today, King of the Cage announces the re-signing of present 105 lb. Atomweight world champion Melissa Karagianis. Melissa, coming off a 25-minute unanimous decision over Andy Ngyuen at the Seneca Niagara Resort & Casino last week, captured the women’s 105 lb. title after a very impressive outing. Melissa, having only lost once in the 105 lb. Atomweight division, signed exclusively with King of the Cage for 6 additional fights. When asked what her plans were after the fight Melissa said, “I wanted to take a week off of training and then start training to fight again before the end of the year. I love fighting for KOTC, and the opportunity to fight all over the world and on national TV each week has really elevated my career.”

Also, KOTC has reached out and signed Chelsea Faulder at 115 lbs. King of the Cage CEO Terry Trebilcock states, “Chelsea has been on our radar for some time. We watched her make a name for herself in local shows in the Columbus, Ohio area, and knew it was finally time to watch her fight her bouts with us on MAVTV. Her aggressive stand up style has made her a crowd favorite and will surely transfer over for TV viewers.” Chelsea has also signed a 6-fight deal and looks to have her first fight on the contract in October of this year.

With fighters like Stephanie Fausto, Cynthia Arceo, Cassie Robb, Laken Jowers, Bi Nguyen and Andy Nguyen that can also fight at 115 lbs., look for this division to secure the headlines of women’s MMA for the next few years.

Finally, KOTC also announces the signing of Susan Phanivong, who is an up-and-coming amateur fighter at 125 lbs., who presently has been filling up venues in Iowa. Susan is a registered nurse that has decided to add knocking out opponents to her medical profession.