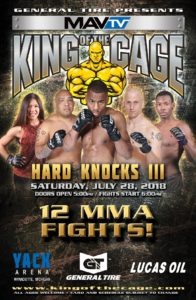 RANCHO CUCAMONGA, CA. (July 5, 2018) – King of the Cage returns to Yack Arena in Wyandotte, Michigan on Saturday, July 28, 2018 with a nationally broadcast event headlined by a main fight card featuring some of the top ranked fighters in both the Michigan region, as well as nationwide.

Also appearing on the card:

Doors open at 5 p.m. and fights start at 6 p.m. Reserve seating and Ringside tickets are on sale now. For more information or to purchase tickets, please visit www.cagetix.com or call (734) 324-7290. Event card subject to change.