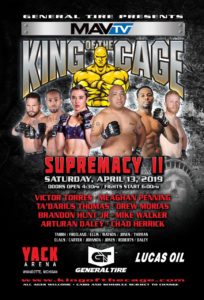 RANCHO CUCAMONGA, CA. (March 12, 2019) –
King of the Cage returns to Yack Arena in Wyandotte, Michigan on Saturday, April 13, 2019 with a nationally broadcast event headlined by a showdown in the Light Heavyweight division between Victor Torres against Jon Tarrh. The co-main events will feature Victor Jones vs. Chad Herrick in a Light Heavyweight battle and Lightweights Drew Morais vs. Sean Felton. The featured fight on the card will be a Women’s Strawweight division bout between Meaghan Penning vs. Marina Coffman. The fight card will also feature some of the top ranked fighters in both the Michigan region and nationwide.