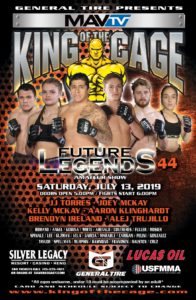 RANCHO CUCAMONGA, CA. (July 1, 2019) – King of the Cage presents an evening of live MMA fights at the Silver Legacy Resort Casino in Reno, Nevada on Saturday, February 9, 2019 with a nationally broadcast event headlined by a Bantamweight World Amateur Title fight between top contenders Joey McKay vs. Naemon Taylor and featuring some of the sport’s most ferocious competitors.

Doors at 5pm / Fights at 6pm. For more information or to purchase tickets, please call (775) 325-7401 or go online to www.silverlegacy.com. All ages. Under 18 must be accompanied by an adult. Event card and schedule are subject to change. Official Hashtag: #FutureLegends44