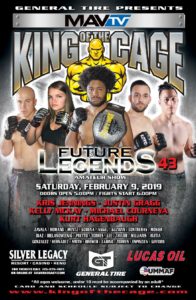 RANCHO CUCAMONGA, CA. (January 4, 2019) – King of the Cage presents an evening of live MMA fights at the Silver Legacy Resort Casino in Reno, Nevada on Saturday, February 9, 2019 with a nationally broadcast event headlined by a Middleweight World Amateur Title fight between current KOTC champion Kris Jennings vs. Mike Foster and featuring some of the of the sport’s most ferocious competitors.

Doors at 5pm. Fights at 6pm. For more information or to purchase tickets, please call
(775) 325-7401 or go online to silverlegacy.com. All ages. Under 18 must be accompanied by an adult. Event card and schedule are subject to change.