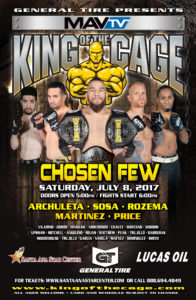 Doors open at 5:00 pm. and fights start at 6:00 pm. Reserve seating and Ringside tickets are on sale now. For more information or to purchase tickets, please visit www.santaanastarcenter.com or call 888.694.4849. Event card subject to change.