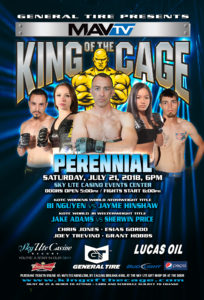 Main Event – Jr. Welterweight160 lbs.
Chris Jones, Durango, Colorado vs. Isaac London, Albuquerque, New Mexico. Jones has been an active competitor, competing in dozens of Jiu Jitsu tournaments, never finishing lower than third. During his professional MMA career, he amassed a perfect 5-0 record, with all wins coming by submission or knockout. Jones relocated to Durango, CO in 2005 to open Durango Martial Arts Academy. When the doors opened in 2006, Chris was owner and head instructor of the first and only true Mixed Martial Arts/Brazilian Jiu-Jitsu academy in southwest Colorado. London is a karate instructor and a very tough competitor who is looking to take down the hometown favorite.