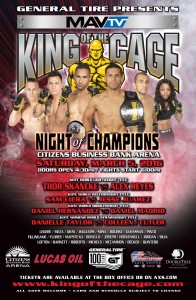 RANCHO CUCAMONGA, CA. (January 22, 2016) – On Saturday, March 5, 2016, King of the Cage returns to Citizens Business Bank Arena in Ontario, California for an exciting evening of MMA action…“Night of Champions.” The show will include four (4) title fights, with three current KOTC champions putting their title belts on the line and will be Broadcast Live on MAVTV.

In the main event, the King of the Cage, the vacant World Jr. Welterweight Championship will be up for grabs, as Chris “Crash” Kirtley from Murrieta, California (Team Fight Syndicate) faces Thor “TNT” Skancke from San Fernando, California (Team Thor).

The third title fight of the evening will feature a rematch for the King of the Cage Middleweight Title. Daniel “Blackout” Madrid (11-4-0) from Glendale, Arizona (Grace Fighting Systems), will defend his belt against former champion Daniel “El Leon” Hernandez (17-11-0) from El Monte, California (The Vault MMA), who lost the title to Madrid in their last fight.

The other title bout will feature another rematch in the Women’s Strawweight Division. Undefeated champion Jamie Colleen (3-0-0) from Philadelphia, Pennsylvania (Dante Rivera BJJ, Daniel Gracie Team, Ricardo Almeida BJJ) against former champion Danielle “Dynamite” Taylor (6-1-0) from Palmdale, California (Saekson Muay Thai). This is rematch from last year where Collen took the belt away from Taylor for her only loss.

This event will be broadcast live in over 50 million U.S. households on MAVTV (214 DIRECTV, 810 Verizon FiOS). Check your local cable provider for cable station in your area.

Doors open at 4:30 pm. and fights start at 6:00 pm. Reserve seating and Ringside tickets are on sale now. For more information or to purchase tickets, please visit www.cbbankarena.com or call (909) 244-5600. All ages. Event card subject to change.

Leave a Reply to King of the Cage Cancel reply