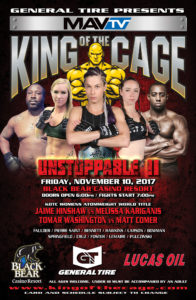 Co-Main Event – Women’s Strawweight 115 lbs.
Chelsea Faulder from Ohio, the exciting 115 lb. “tornado” is fighting the first time since recently signing a contract with King of the Cage. Going up against her will be Heather Denny, fighting out of Team Wildman, in Brighton, Colorado.

Reserve seating and Ringside tickets on sale soon. For more information or to purchase tickets, please visit www.blackbearcasinoresort.com or call (888) 771–0777.