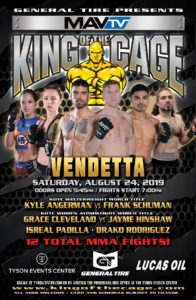 RANCHO CUCAMONGA, CA. (June 10, 2019) – King of the Cage will debut at Tyson Events Center in Sioux City, Iowa on Saturday, August 24, 2019 with a nationally broadcast event, headlined by two World Title fights featuring Kyle Angerman against Frank Schuman for the vacant KOTC Welterweight World Title and current champion Jayme Hinshaw defending her belt against Grace Cleveland for the KOTC Women’s Atomweight Title. Also featured on the card will be Israel Padilla and Drako Rodriguez. There will be twelve fights on this exciting card.

KOTC Welterweight World Title (170 lbs.)
Kyle “The Dude” Angerman (6-1), Des Moines, Iowa (One Academy) vs. Frank “The Nightmare” Schuman (10-5), Lac Du Flambeau, Wisconsin (Ojibwe Nation). This is a rematch between these two top fighters in the division. Angerman is one of the up and coming stars in MMA and top ranked, as well as, a former KOTC Amateur World Champion. He is coming off an impressive second round victory in his last bout. Schuman is one of the top ranked Welterweights in MMA and has won his last three of four fights impressively.

KOTC Atomweight World Title (105 lbs.)
Current champion Jayme Hinshaw, Albuquerque, New Mexico (FIT NHB) vs. Grace “Thai Kitten” Cleveland (4-0), Littleton, Colorado (Factory X Muay Thai/MMA/BJJ). Hinshaw has not lost since capturing the title over a year ago. Cleveland is one of the top ranked women fighter’s pound for pound and has only one loss in both her professional and amateur career.

Doors open at 5:45 pm. and fights start at 7:00 pm. Reserve seating and Ringside tickets are on sale now. Tickets are available online at tysoncenter.com or by visiting the Primebank Box Office at the Tyson Events Center. Official Hashtag: #Vendetta