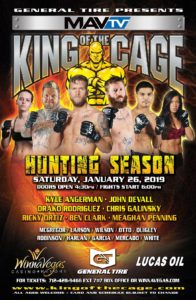 Main Event – Super Welterweight (175 lbs.)
Kyle “The Dude” Angerman (5-1), Des Moines, Iowa (One Academy) vs. Quinton McCottrell, Joliet, Illinois (11th Dimension). Angerman is one of the up and coming stars in MMA and top ranked and former KOTC Amateur World Champion. He is looking to avenge his only loss in his last bout. McCottrell is a veteran fighter who has won his last three bouts and has fifteen victories in his professional career.

Featured Event – Welterweight (135 lbs. Bantamweight)
Drako “The Great Draculini” Rodriguez, Sioux City, Iowa (One Academy)
vs. Shaine “Skeltetor” Moffitt, St. Charles, Missouri (Charles MMA & BJJ). Both fighters have won their last two fights and are top ranked. Rodriguez is coming off his only loss in both his professional and amateur career and was a former amateur World Champion. Moffitt is top ranked and has won his last two bouts, both in the first round. impressively.