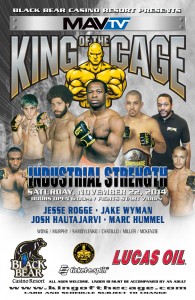 RANCHO CUCAMONGA, Calif. (October 24, 2014) King of the Cage, one of the world’s premier organizations for Mixed Martial Arts, and  Black Bear Casino Resort in Carlton, Minnesota today announced that tickets for the Saturday, November 22, 2014 “Industrial Strength” are now on sale.

The event will be broadcast Live to a Nationally Televised audience on MAVTV, owned by Lucas Oil and shown in 50 million homes. The card will feature some of the most outstanding fighters both locally and nationally.

Other Featured Bouts will include:
Heavyweight 265 lbs
Anthony McDonald from Oregon (Midtown MMA) vs. Brett Murphy from Minneapolis, Minnesota (Association of Martial Arts)

This event will be Broadcast Live in over 50 million U.S. households on MAVTV (214 Direct TV, 248 Dish Network). Check your local cable provider for cable station in your area.