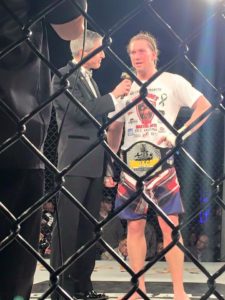 RANCHO CUCAMONGA, CA. (August 22, 2016) – King of the Cage, the leader in casino mixed martial arts entertainment, is proud to announce the signing of Kyle Angerman to an exclusive, multi-year professional contract.

Kyle “The Dude” Angerman, who grew up in “Siouxland,” was undefeated in his amateur career (7-0-0) and is one of the rising stars of MMA. Angerman, who is 27 years old is from Des Moines, Iowa and trains out of Des Moines Mixed Martial Arts Academy in Des Moines, won the KOTC Amateur Welterweight title in January this year and then defended his belt in April with a knock-out victory. In June he moved up to the 185 lb. Middleweight division to fight for the vacant title and won with an impressive twelve-second first round knockout.

“I am thrilled to join King of the Cage, where so many icons have been a part of over the years. Being signed by KOTC is a great honor,” stated Angerman. “I don’t remember what it’s like to lose, and I’m not planning on finding out any time soon.”

Additional Background
Hometown: Sioux City, Iowa
High school: Sioux City East High
High school Sports: Wrestling & Football
Hobbies When Not Fighting: Being with family and in the gym,
Short Term Goals in MMA: “I just want to make my name known and earn the respect I know I deserve!”

“Kyle is a tremendous athlete who puts forth an exciting effort each and every time he steps into the cage,” said Terry Trebilcock, President & CEO of King of the Cage. “He is without question a great addition to our organization, and has tremendous talent that our fans will certainly enjoy at each and every event he fights.”