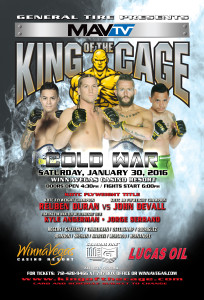 RANCHO CUCAMONGA, Calif. (December 4, 2015) – King of the Cage will return to WinnaVegas Casino Resort in Sloan, Iowa for the first of four shows in 2016 with another star-studded, world-class Mixed Martial Arts (MMA) mega-event, headlined by a Flyweight (135 pounds) World Title showdown between John DeVall and Reuben Duran, on Saturday, January 30, 2016.

The main event will feature two current title holders for the 135 lb. Flyweight belt. John DeVall, fighting out of DeVall MMA from Sioux City Iowa, will battle Reuben Duran from Redlands, California who fights out of Pinnacle MMA. DeVall is the current 125 lb. Junior Flyweight champion and Duran is the current 135 lb. Flyweight champion. DeVall won the title in his last bout with an impressive knockout and has won his last six of his seven fights. Duran, who has had a stellar professional career, has won his last three bouts.

In the co-main event, for the 170 lb. Welterweight Amateur World Title, Kyle Angerman from Des Moines, Iowa (Porcelli MMA) will take on Martin Sellers, from North Platte, Nebraska. Angerman is undefeated, winning his first four fights in impressive fashion. Both fighters are top ranked in both Iowa and in the Midwest.

Featured fights on card will include:

This event will be broadcast in over 50 million U.S. households on MAVTV (214 DIRECTV, 248 Dish Network, 810 Verizon FiOS). Check your local cable provider for cable station in your area.

Doors open at 4:30 pm. and fights start at 6:00 pm. Reserve seating and Ringside tickets are on sale now. For more information or to purchase tickets, please visit www.winnavegas.com or call (712) 428-9466. Event card subject to change.