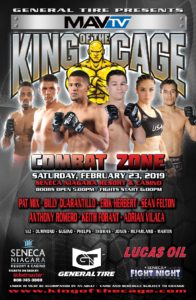 Co-Main Event -Flyweight (135 lbs.)
Pat “Patchy” Mix (9-0), Buffalo, New York (WNY MMA) vs. TBD. Mix is a KOTC Title holder and one of the top rising stars in MMA. A successful high school wrestler and current assistant wrestling coach, Mix is undefeated in each of his amateur and professional fights spanning the last five years.

Doors open at 5:00 pm. and fights start at 6:00 pm. Reserve seating and Ringside tickets are on sale now. Tickets are available at select Seneca Resort & Casino retail outlets, online at SenecaCasinos.com and Ticketmaster.com, all Ticketmaster locations, or by phone at 800-745-3000. Under 18 must be accompanied by an adult.