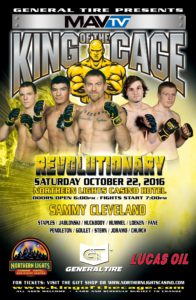 RANCHO CUCAMONGA, CA. (October 6, 2016) – King of the Cage, the leader in casino mixed martial arts entertainment, returns to Northern Lights Casino Hotel & Events Center in Walker, Minnesota on Saturday, October 22, 2016 with another world-class mega-event headlined by a Heavyweight showdown between Sammy Cleveland and Jay Feiock and also featuring some of the sport’s most ferocious competitors.

The main event in the Lightweight Division, will feature Sammy “SammyBone” Cleveland, from Bena, MN. facing off against Jay “Retaliate” Feiock from Cass Lake, MN. This will be the farewell fight for veteran Cleveland, as well as a rematch from 2014. In that fight, Feiock saw success early in on but Cleveland’s experience prevailed in the end. Feiock is looking to avenge and send Cleveland out with a loss.

The Co-Main Event, in the Lightweight Division, will feature a showdown between Marc “The Pummel” Hummel (Cross Lake, MN.) against Cody Garness (MN.)