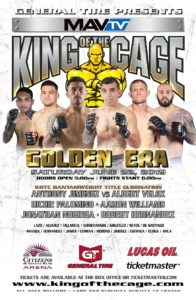 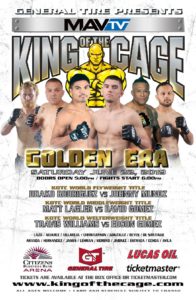 RANCHO CUCAMONGA, CA. (May 16, 2019) – King of the Cage returns to Citizens Business Bank Arena in Ontario, California on Saturday, June 22, 2019 with a nationally broadcast event headlined by three World Title bouts. The main event for the Flyweight belt will be headlined by Drako Rodriguez vs. undefeated Johnny Munoz. The co-main events will feature Matt Lagler vs. David Gomez for the Middleweight title and Travis Williams vs. Edson Gomez for the Welterweight belt.

Main Event – KOTC Flyweight World Title (135 lbs.)
Drako “The Great Drakolini” Rodriguez (5-1), Sioux City, Iowa (One Combat Academy) vs. Johnny “Kid Kvenbo” Munoz (8-0), Norco, California (C-Quence MMA). Rodriguez is one of top fighters in the division and is coming off and impressive first-round victory. He was also the former amateur World Champion. Munoz has never lost in both his professional and amateur career and six of his eight pro fights have been won is the first round.

Co-Main Event – KOTC Welterweight World Title (170 lbs.)
Travis Williams (2-2), San Pedro, CA. (Elite Training Center) vs. Edson Gomez (4-1), Upland, CA. (Combined Martial Science). Williams, who has had a successful professional and amateur career, won his last out with a first-round knockout. Gomez has only one loss and is top ranked in the welterweight division.