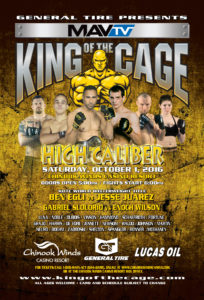 The Main Event, in the 170 lb. Welterweight Division, will be for the King of the Cage World Title and feature the reigning and defending KOTC champion Jesse Juarez (23-11) from Torrance, California (Bodyshop MMA) against Ben Egli (6-1) from Tigard, Oregon (Gracie Technics). Both Juarez and Egli are top ranked.

This event will be broadcast in over 50 million U.S. households on MAVTV (214 DIRECTV and Verizon FiOS (810). Check your local cable provider for cable station in your area.

Doors at 5 pm / Fights at 6 pm. For more information or to purchase tickets, please call 1-888-MAIN-ACT (624-6228) or go online to www.chinookwindscasino.com or in person at the Chinook Winds Casino Resort Box Office. All ages. Event card and schedule are subject to change.