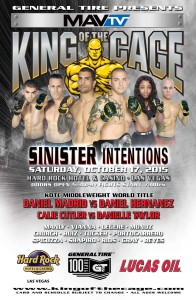 The main event will be for the 185 lb. Middleweight World Title, when current champion Daniel “El Leon” Hernandez (18-10), from El Monte, California (The Vault MMA & Fitness) puts his belt on the line against Daniel “Blackout” Madrid (11-4) from Glendale, Arizona (Gracie Fighting Systems). This is a long awaited matchup for these two heralded fighters. Hernandez has a six fight winning streak and Madrid has won his last four fights.

Doors open at 5:30 pm. and fights start at 7:00 pm. Reserve seating and Ringside tickets are on sale now. For more information or to purchase tickets, please visit www.hardrockhotel.com or call (702) 693-5000. All ages. Event card subject to change.