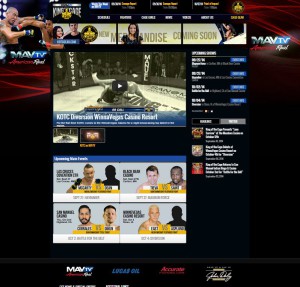 RANCHO CUCAMONGA, Calif. (September 25, 2014) King of the Cage announces their complete redesign and launch of its website, www.​kingofthecage.​com.

The newly redesigned and rebranded site has extensive content including highly improved look and new features. Fans will now have the ability to search fighters and compare them against each other using the new profiles feature, comment on news posts and get information on personnel, along with expanded social media pages.

“It is an exciting time for King of the Cage and we are thrilled that the company’s striking and revamped site is successfully up and running,” said Terry Trebilcock, Founder and President, King of the Cage. Kingofthecage.​com now showcases a much more visual look and feel including upcoming Television listings on MAVTV, upcoming fights, fighter bios, stats, and more. “The launch of the website is one of many steps King of the Cage is taking to strengthen our brand even further. Fans will also soon be able to purchase a redesigned line of King of the Cage MMA merchandise….KOTC Cage Gear.”