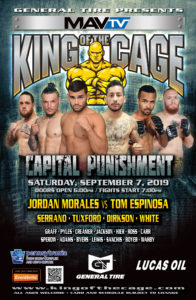 RANCHO CUCAMONGA, CA. (July 30, 2019) – King of the Cage returns to the Keystone State with a debut event at the Pennsylvania Farm Show Complex & Expo Center in Harrisburg, PA on Saturday, September 7, 2019. The nationally broadcast event will be headlined by a Bantamweight showdown between two of the top-rated fighters in the state of Pennsylvania, Jordan Morales vs. Tommy Espinosa. The second featured bout in the Catchweight battle will be Jake Kozorosky vs. Josh Jackson.

Doors open at 6:00 pm. and fights start at 7:00 pm. Reserve seating and Ringside tickets are on sale now. Tickets are available online on the Eventbrite website. Go to:
EventBrite Capital Punishment Tickets