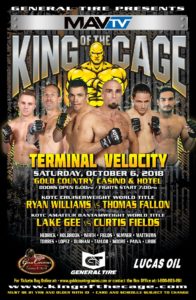 RANCHO CUCAMONGA, CA. (September 11, 2018) – King of the Cage returns to Gold Country Casino & Hotel in Orville, California on Saturday, October 6, 2018 with a nationally broadcast event headlined by a Cruiserweight World Title fight between Thomas Fallon vs. Ryan Williams for the vacant belt. In the co-main event, Ricky Turcios takes on Josh Paiva in a Bantamweight showdown.