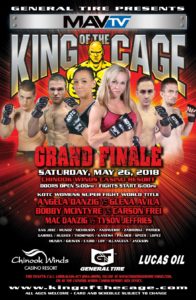 RANCHO CUCAMONGA, CA. (March 26, 2018) – King of the Cage, the leader in casino mixed martial arts entertainment, returns to Chinook Winds Casino Resort in Lincoln City, Oregon on Saturday, May 26, 2018 with a nationally broadcast event headlined by a Women’s Strawweight showdown between Glena Avila, who is competing in her final fight against Angela Danzig. The co-main event, in the Lightweight division will feature Bobby McIntyre vs. Carson Frei. The featured fight on the card will be Mac Danzig vs. Tyson Jeffries.

Main Event – Women’s Super-Fight KOTC World Title 120 lbs.
Glena “Heartless” Avila, Vancouver, Washington (Fistcuffs) vs. Angela “Momma” Danzig, Los Angeles, California (Danzig MMA). This will be Avila’s final fight since recently announcing her retirement from mixed martial arts. The former champion who is one of the leaders in the sport, will be hanging up the gloves after a very successful career. Danzig is the wife of legendary fighter Mac Danzig, who is also fighting on the card. In her last bout, she lost a very close decision for the Strawweight belt.

Featured Event – Catchweight 165 lbs.
Mac Danzig, Los Angeles, California (Danzig MMA) vs. Tyson “The Antihero” Jeffries, Portland, Oregon (Gracie Barra). Danzig is one of the more experienced and legendary lightweights in MMA with 35 wins. He made his professional debut in 2001.The first notable achievement of Danzig’s career came in 2005, when he won the KOTC Lightweight Championship and defended it four times. Jeffries, who has 14 wins in his professional career, fought for the title in his last fight and is top ranked.